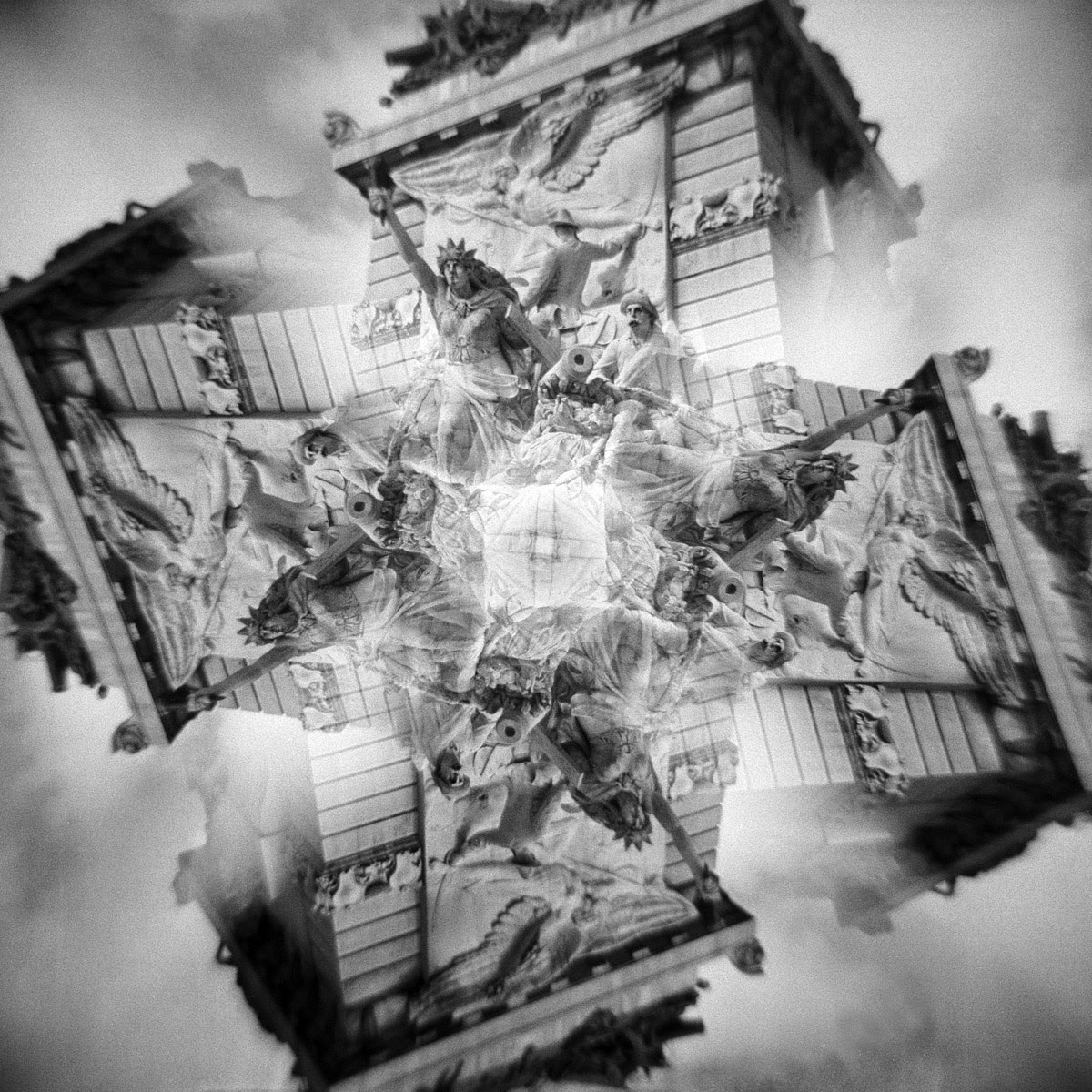 One of my Holga multiple exposures appears in Issue 3 of So It Goes, the Literary Journal of the Kurt Vonnegut Memorial Library. I made the following remarks at the release event for the journal at the library on November 8, 2014.

In the first chapter of Slaughterhouse Five, Vonnegut recounted a trip he took with his old WWII buddy, Bernhard V. O'Hare, to Dresden, where they had been prisoners of war in 1945. After returning to the USA, O'Hare received a postcard at Christmastime from the cab driver who drove them around Dresden. The card said , "I wish you and your family also as to your friend Merry Christmas and a happy New Year and I hope that we'll meet again in a world of peace and freedom in the taxi cab if the accident will." Vonnegut wrote, “I like that very much: 'If the accident will.'” And I say to you, “I like that very much: 'If the accident will.'”

My photography frequently involves accidents. When the results are good, I call them happy accidents. I like to use multiple exposures to dismantle reality and put it back together in different ways. To do this I use a $30 plastic camera mounted on a gadget I made out of plywood and a lazy Susan bearing. I never know exactly what the accident will put on the negative until I develop the film. That's as close as I'll come to telling you how to make a photograph like mine. I believe this picture invokes two strong influences on Kurt Vonnegut, Jr.—Indianapolis, where he grew up, and war. I made this photo at the Soldiers and Sailors Monument at the Circle in the center of Indianapolis, not far from here. I didn't know it at the time, but the title of this sculpture group is simply “War.” It was carved by an Austrian named Rudolph Schwarz. Sculptures of similar majesty, carved by equally talented Europeans, were destroyed during the firebombing of Dresden that occurred while Kurt Vonnegut was a prisoner of war there.

I recently learned the central figure in the Indianapolis sculpture group is Columbia, the female personification of America, leading the way into battle with torch held high. When I looked at the photo, I felt this particular rearrangement of reality showed a woman leading the way out of the chaos of battle, so I called it “Emerging from War.” When I framed this particular print and viewed it from a distance, I noticed an unintended accident. It resembles a swastika—a reminder of the Nazis and the horror of war. Interestingly, the word swastika is derived from a Sanskrit word meaning “a lucky or auspicious object.” It is an ancient decorative symbol forever stigmatized by Hitler.

America has had many opportunities to emerge from war and to plunge back in again. Witness the fact that the Soldiers and Sailors Monument is dedicated to those who fought in the various American wars of the eighteenth and nineteenth centuries, including the Revolutionary War, the War of 1812, the Mexican War, the Civil War, the Frontier Wars, and the Spanish-American War. The participants in WWI are honored separately at The Indiana World War Memorial, also just a few blocks from here. It is not called the World War I Memorial, because at the time construction of the building began in the 1920s, no one could imagine that humanity would descend into a second world war. So it goes. In Vonnegut's Timequake, Kilgore Trout referred to WWII as “Western Civilization's second unsuccessful attempt to commit suicide.” And so WWI was the first.

If you were to ascend one of the grand staircases of the Indiana World War Memorial, you would see, among others listed on the wall, the name of my great uncle Charles Neal. He was an Indiana farm boy who entered the army in August 1918 and died in basic training at Camp Custer, Michigan, about six weeks later, during the influenza epidemic. Charlie was 21 years old, about the age of Kurt Vonnegut, Jr. when he entered the army during WWII. Unlike Mr. Vonnegut, Uncle Charlie barely learned to be a soldier and did not live long enough to try out his newly-acquired military skills. Fortunately for us, Kurt Vonnegut, Jr. survived the ordeal of WWII and went on to create the literary legacy that brings us together today—a happy accident indeed!
Posted by Unknown at 11:21 AM